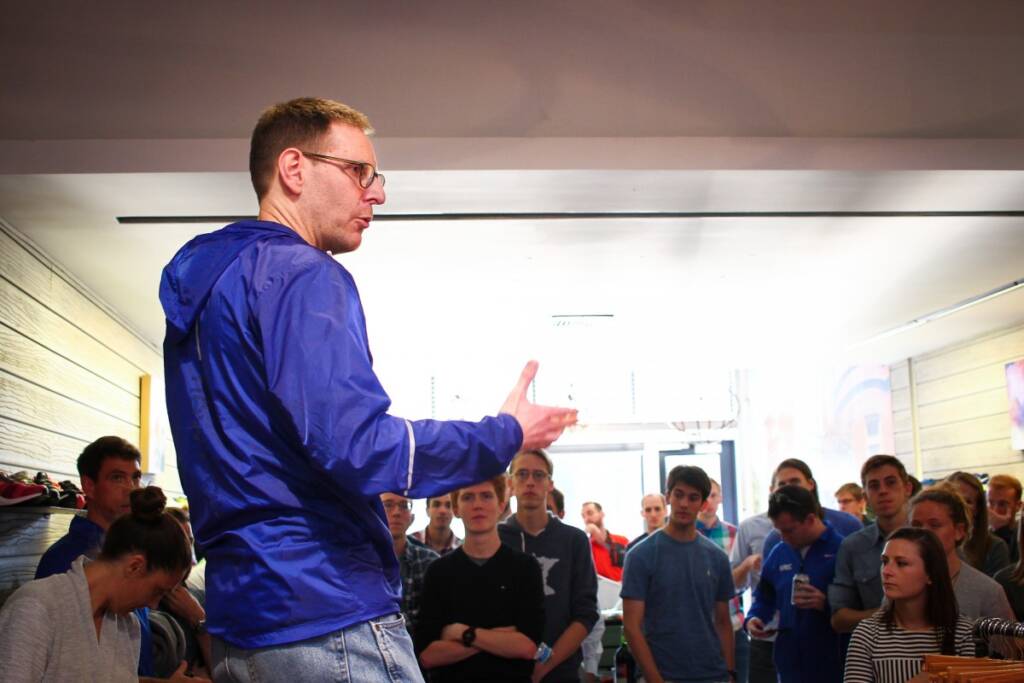 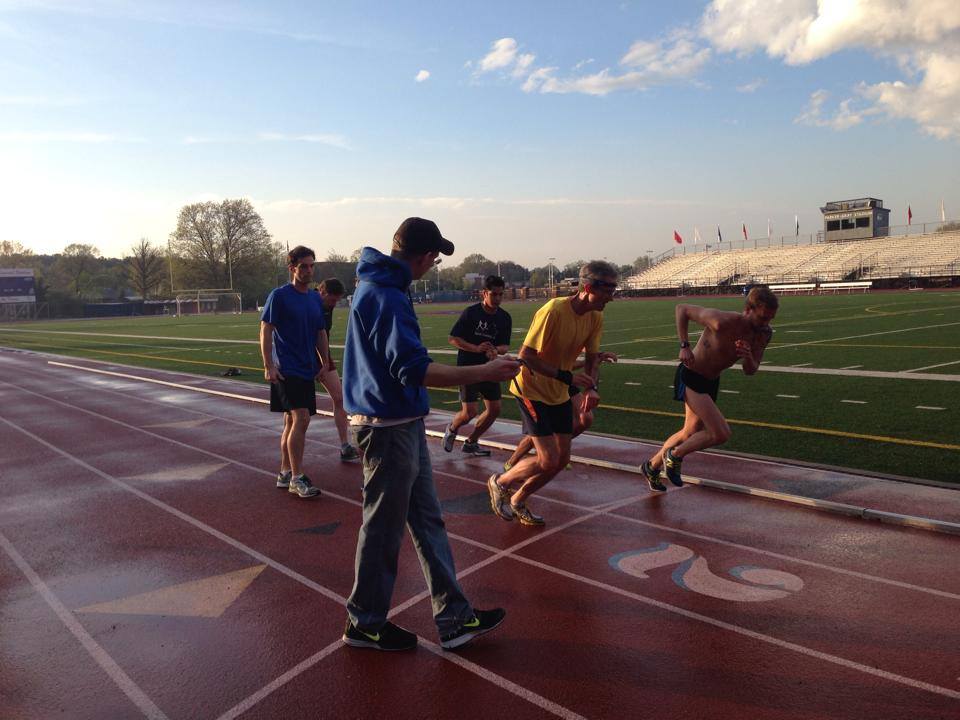 “Okay gang. Nice and easy. Nothin’ too crazy.” If those words sound familiar to you, you may have spent some time circling a track with NOVA Coach Jerry Alexander keeping a careful eye on your progress. As the coach for the Northern Virginia Running Club (NOVA), Alexander has spent more than his fair share of hours watching athletes race around that loop, and his role as trainer, mentor, workout designer, injury preventer, and voice of reason has helped NOVA to become the team it is today.

Alexander joined NOVA in 2006, following several years in college coaching. The decision to transition from serving as a Division I college cross country and track coach to training the members of a local running club was not one to be made lightly. “I was very reluctant to do it, as I had never coached recreational runners, and did not particularly want to start,” he describes of his decision to accept the job of the NOVA Head Coach position.

Though by then a fairly seasoned and experienced track coach, having started as a graduate assistant in the early 1990s while in law school at Vanderbilt, and spending two years as Head Coach at the University of the District of Columbia and seven years as Assistant Coach at American University, Alexander wasn’t sure he was interested in taking on the responsibility of training runners who by and large are fitting in workouts around their day jobs.

However, as a favor to his coaching colleague Jim Hopkins, former Head Coach at George Washington University, who resigned the NOVA Coach position after just a few months upon moving to Ireland unexpectedly, Alexander accepted the challenge. Eight years, multiple stopwatches, and many athletes later, NOVA is lucky to have him continue on as our tireless leader.

Running in college as a walk-on at Columbia University (and “not a very good one, at that,” according to Alexander), piqued his interest in coaching, as well as an increasing awareness of the level of commitment, hard work, and consistency required to succeed in the sport. After switching his focus from running to coaching at Vanderbilt, and later at UDC and American, Alexander began to refine his coaching technique, methodology, and understanding of the process by which a great runner is made.

He built an impressive roster of success stories over these years, including Sean O’Brien, a four time All-American, and sub four-minute miler at AU, and Samia Akbar, an All-American and American University’s most decorated runner of all time, who later ran in the 2007 World Championships marathon for the United States. 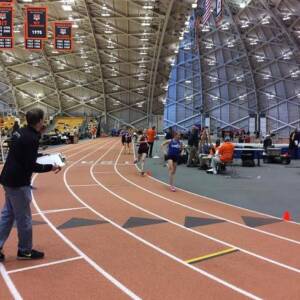 Coaching superstars has its challenges, to be sure, but once Alexander decided to take on the runners of NOVA, he realized he had to make some changes in how he approached his athletes. He says his greatest challenge in coaching club teams is helping his athletes to balance their running with the rest of their lives. Achieving the proper balance is a constant struggle.

“The athletes I coach all work full time, or are in school full time, and many of them have families,” he said. “It’s very difficult for them to find the time to train properly and meet their other responsibilities. They all take the running very, very seriously, and make many sacrifices to maximize their performance, but ultimately other things in their lives have to take precedence.”

In order to address the unique personal situations, running backgrounds, and performance goals of all his athletes, Alexander’s philosophy about coaching is tailored to each individual runner.

“I’ve learned over the years that coaching is not a one-size-fits-all proposition,” he said. “Many runners, particularly beginners, have the idea, based on training programs they have read in magazines and books, that there’s one formula for success for the 5k, the marathon, and every race in between. My view is that the opposite is true–a training plan that may be appropriate for some runners is absolutely not appropriate for others.”

The benefit of having a coach is that the coach can determine what works for you, and what does not, and Coach Jerry is experienced enough to know that a realistic assessment of each athlete’s strengths and weaknesses greatly increases his or her chances for success.

No one would argue that his philosophy has reaped results. A highlight of his NOVA tenure includes coaching Martha Merz when she broke the 17 year-old American Record for 10,000 meters on the track for the 45 and over age group at the 2008 Penn Relays. Among the other elite runners who have achieved exceptional results under Coach Jerry’s guidance with NOVA are:

• Emily Potter, a three-time Olympic Trials qualifier in the marathon
• Laura O’Hara, who was the First American and fourth overall finisher at the 2010 Wilson Bridge Half Marathon in the outstanding time of 1:19:35
• Samantha Kirby Cole, who with Coach Jerry’s help has dropped her marathon PR from 3:19 to 2:59:50, and has placed in the top 10 at the Marine Corps and Houston marathons
• David Wertz, who has improved in the course of almost ten years working with Coach Jerry from an average runner to a national caliber masters athlete who has run PRs of 15:11 for 5000 on the track, and 25:38 for 8k and 31:30 for 10k on the roads. 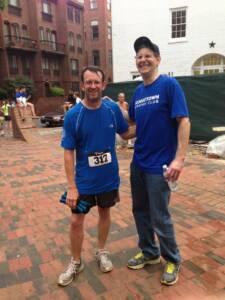 While Alexander’s style of coaching is personalized for each athlete, deciding to join (and actually participating regularly in) a running club is a personal decision for all runners as well. Alexander advises interested runners to start with a list of priorities. Some recreational runners are looking for a running club to provide a social outlet, while others are interested only in improving their performance. There are lots of options in the DC area, and if prospective members know what they are looking for, they are more likely to find it. Alexander believes that “At NOVA, we try to be the best of both worlds, and I think we’ve done a pretty good job of meeting our members’ expectations in both of those areas.” 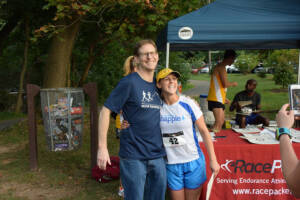 Coaching at NOVA, while fulfilling, is not Alexander’s only responsibility. He also took on the head coach job of the Georgetown Running Club (GRC) in 2010. GRC is an elite, invitation-only club based in Bethesda MD, composed of former collegiate stars and several runners with experience competing at the national level.

Some of the athletes Alexander coaches at GRC include:
• Frances Koons, a two-time Olympic Trials qualifier on the track who represented the United States in the 2016 Great Edinburgh Cross Country Race
• Lucas Meyer, a two-time Olympic Trials qualifier
• Kieran O’Connor, who qualified for the 2016 Olympic Trials Marathon by running 1:04:38 for the half marathon, an 80 second PR
• Teal Burrell, who qualified for the 2016 Olympic Trials Marathon by running 2:42:13, an astounding 10 minute PR
• Karl Dusen, who ran the 2008 US Olympic Trials Marathon, considered by Alexander to be the greatest distance runner in Columbia University history, as his 10,000 meter school record of 29:00 is 30 seconds faster than the second fastest time
• Sam Luff, a 2010 Cornell graduate who has improved his 10,000 meter time in two years from 30:34 to 29:37
• Lindsay O’Brien, a 6-time All American at Yale who placed 3rd in the NCAA cross country championships her junior year.

Because of his two distinct yet complementary coaching roles, Alexander can view his goals as a coach as two-fold. “Any coach who’s being honest will admit that he wants to work with the best athletes possible, and I’m no exception,” he said.”I truly enjoy the working with the elite athletes at GRC, and I’m honored that they trust me to guide their training. But I also really enjoy coaching NOVA. It’s truly a pleasure to see athletes improve, and I take great satisfaction from seeing NOVA runners meet and exceed their goals. As long as an athlete is willing to work hard and train seriously, I’m going to do my best to coach her, no matter her skill level.”

In his abundant spare time between coaching two track clubs and answering several dozen to several hundred coaching emails per day (often hitting the reply button within minutes), Alexander works in his real job as a trial attorney in the Civil Division of the United States Department of Justice.

His wife Michelle and 13 year old son Jacob keep him fully occupied in all remaining moments of the day. The NOVA Running Club is fortunate to have Coach Jerry’s insight, guidance, professionalism, interval workouts, stopwatches, baseball caps, and consistent and careful attention to all runners as valuable members of the team, and the athletic achievements demonstrated by many of our runners are indicative of the benefits we gain from having him as our coach.

Tempo – 6:30PM – Every Thursday
Contact Us For Location & Workout Info

Social distancing Guidelines will be followed

Congrats to NOVA’s Cary Chaffee for getting to p

Thank You To Our Sponsors